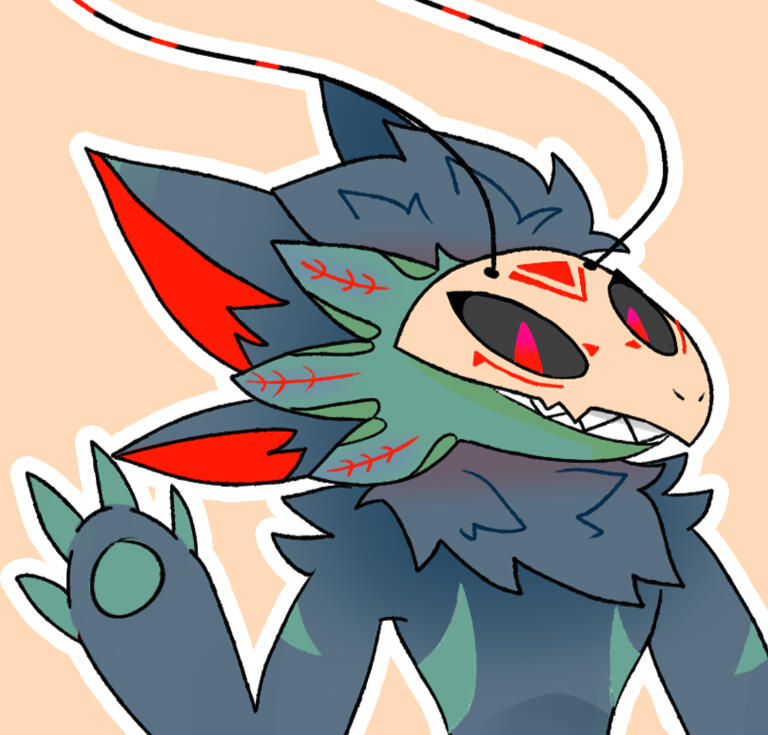 In the year 2100 3rd millennium, Almost all life forms including humans have been almost extinct because of the global war in which almost a thousand super nukes were used that caused it all. Gaia also known as the planet Earth is in a Cataclysm state as survivors bunked down and finally deplete their resources. Meanwhile, in one underground military research facility, a survivor scientist named Paul is conducting a long-term experimental breakthrough of a combined Earth species.These species are in a thick clear polycarbonate container tube filled with sufficient nutrients for the experiment to live long. The specification is the combination of the modified amphibian, regenerating ability, and gills taken from the axolotl, a hybrid of a combined insect antenna to feel the surface of an object, sense hot and cold. Detect movement of air or wind. Antennas being in pairs means they can also smell in stereo like the real insects themselves. Two sets of ears for both sides for enhanced hearing. They also have internal and external skulls it being layered for more protection of the brain, the design tends to receive bullet ricochets. The body is a set of all sorts of different animal limbs depending on the military needs. A specific limb can be cut and injected with a serum for that limb to regenerate in a different limb type. Although naturally cutting a limb would hurt so anesthesia is required for that operation. Paul also modified this hybrid’s DNA to be able to withstand a substantial amount of radioactive and gamma radiation.Paul is overjoyed with this accomplishment. It was planned for humans to transfer consciousness to this hybrid species to enhance military power but that plan has been long gone. He plans to use it on himself and venture out to find more survivors so he can maybe save humanity by converting them to these species for higher survivability, not entirely looking like humans anymore but surviving with the human mind is good enough. As he prepares for the operation he lets a machine check his health status and upon finishing the overall check, the machine concludes consciousness transfer successful rate would be less than 5%. He’s body is not able to withstand the consciousness transfer as his body is of dying age. Devastated and running out of time. He decided to give this modified species their consciousness and hopefully be friendly enough to help him save others. Though it took him two more years to develop and finish his plans, He grows weaker.It’s finally time to start the process of reanimation. During this process, the experimental species starts twitching and violently moving, and when the process is complete everything is silent and the body stops moving. Paul goes closer to the container and sees the experiment open its eyes for the first time, confused and not familiar with its body. Paul commands the computer to drain the fluid and open the container seals, as the seals open the experiment trips down and fall to the ground. Paul, with instinct, tries to help but it hisses, he backs off but slowly comes back close to hold its claws and comfort the confused creature.As time passed by, Paul and this new creature what he calls Pinnthalotl bonded together, learning about all things on Earth. All our wonders, accomplishments, and events. He also taught this creature to speak in English. He also told him about his plans to save humanity whether they be converted into Pinntholotl or be saved as humans. They agree to reanimate a few more Pinnthalotls to help them accomplish this critical task. In this time Paul is about to pass away and is spending his last moments with his experiment finally giving him a name, Verism. He always wanted to call his son that, but he never got a wife. They both shared a laugh and finally passed away to which Verism replies “Thank you, it’s a beautiful name” and a tear slid down his face.Verism taught his fellow Pinntholotls and prepared for their journey. They travel around the globe, kindly introducing themselves and offering help to save countless lives, Improving their technologies and repopulating the world both humans and Pinntholotl’s while trying to maintain peace as conflict, mysteries and many misunderstandings arise. After a few years have passed Verism visits Paul’s grave cleaning and decorating fresh beautiful flowers and sits beside his grave. “We’ve lost so many humans and Pinntholotl’s trying to save lives but we’re still trying to...Thank you dad for giving humanity another chance, and a new one for us Pinntholotl's, I love and miss you, hope to see you again one day.” 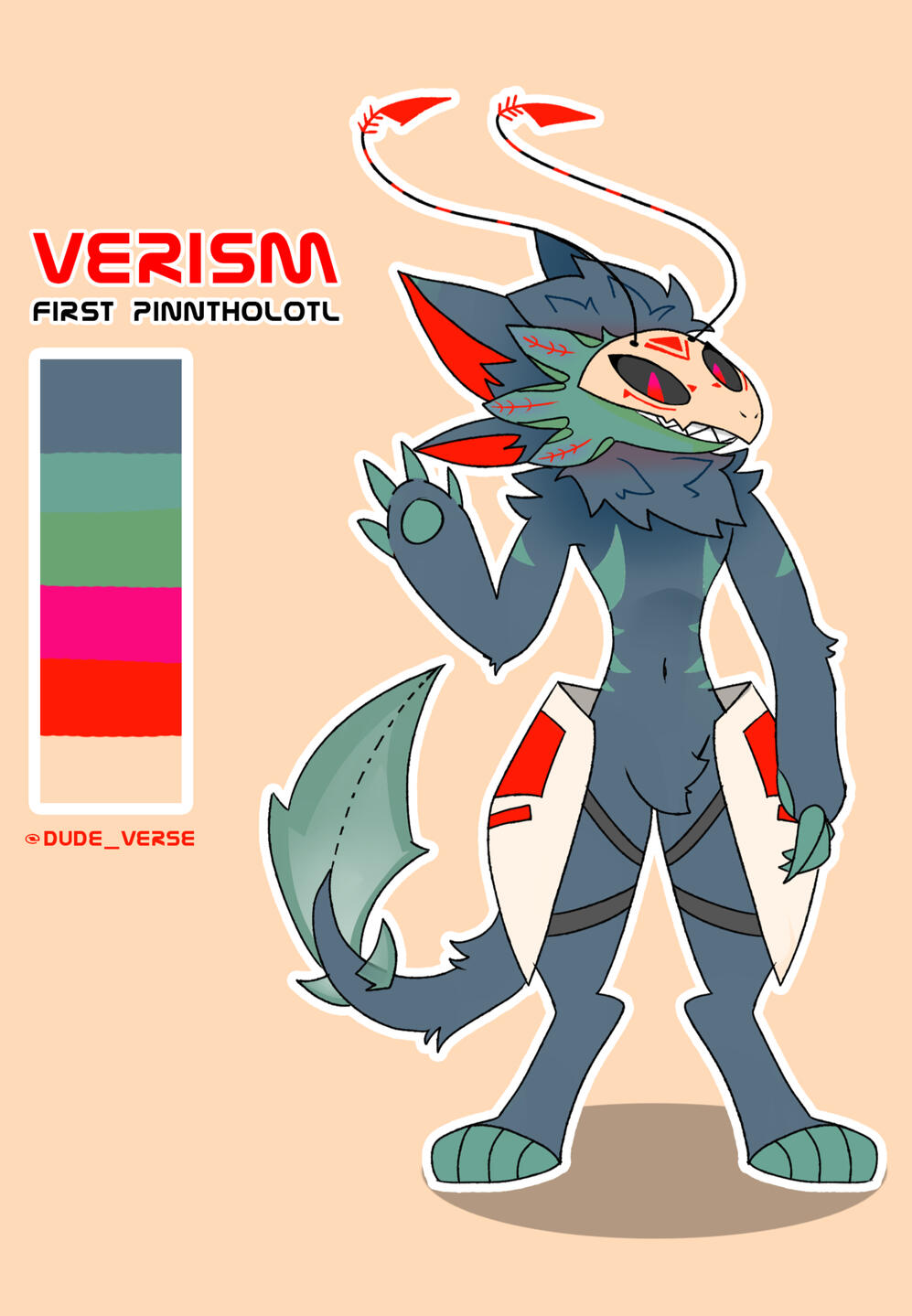 Creating your own design 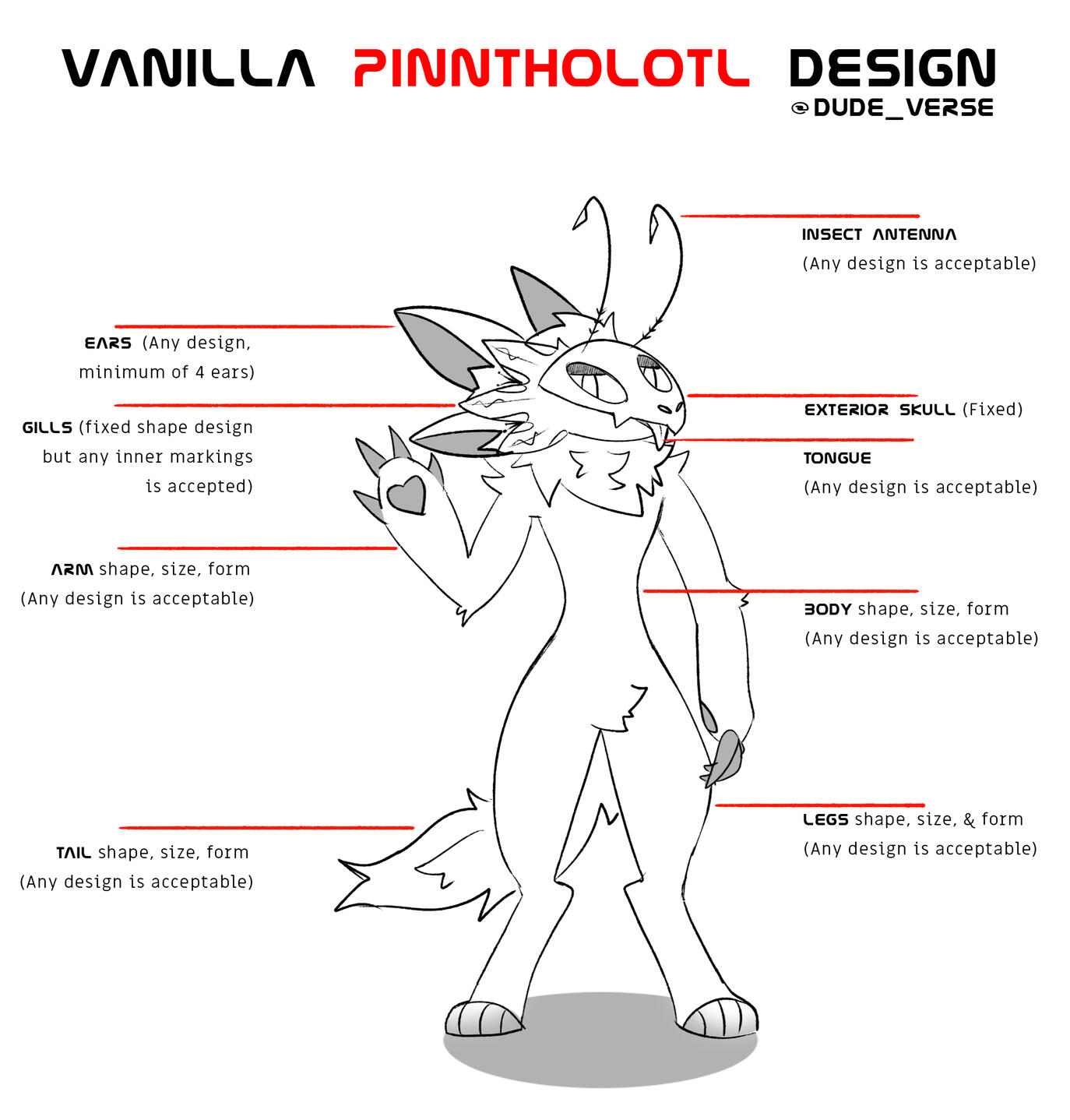 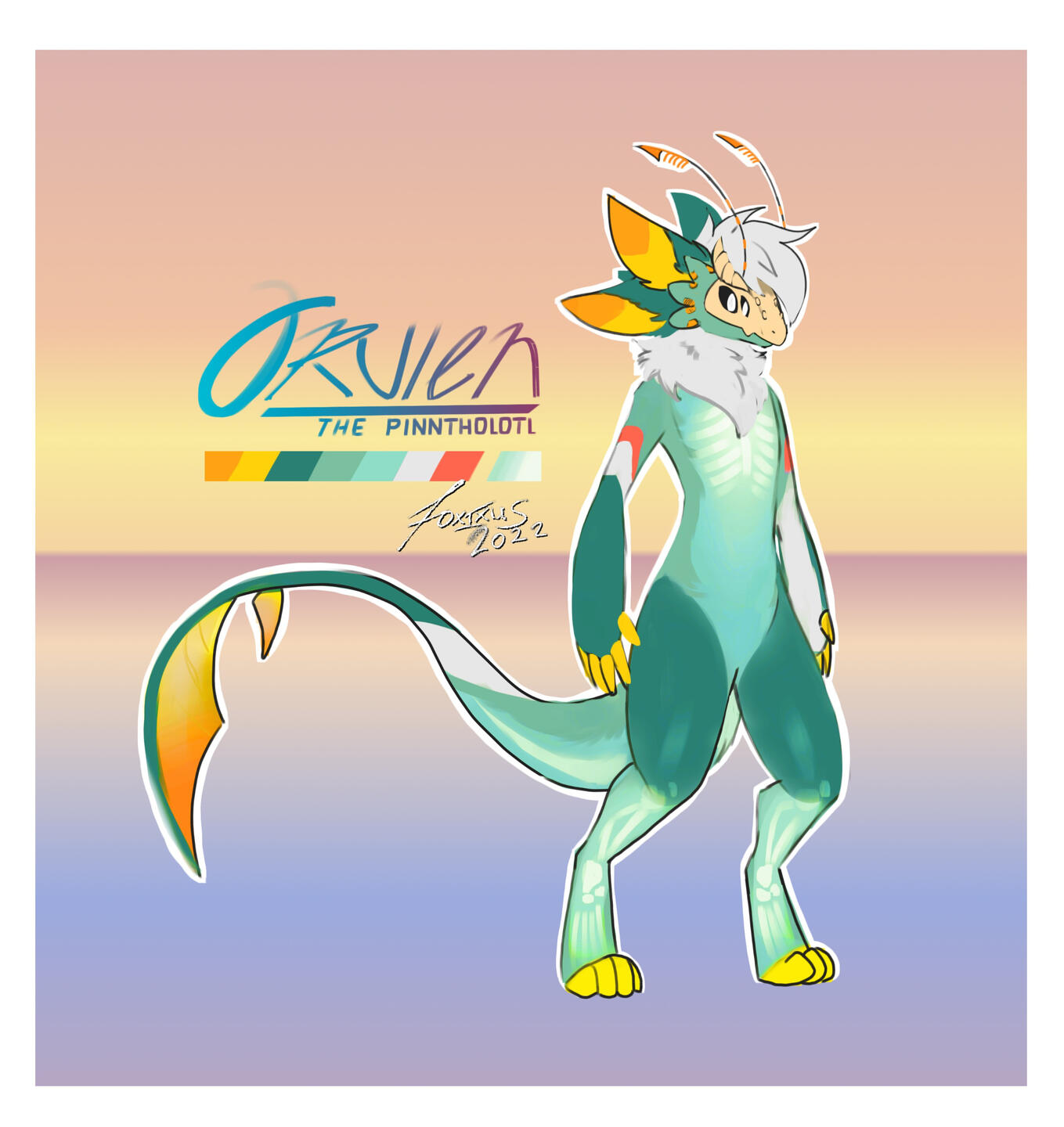 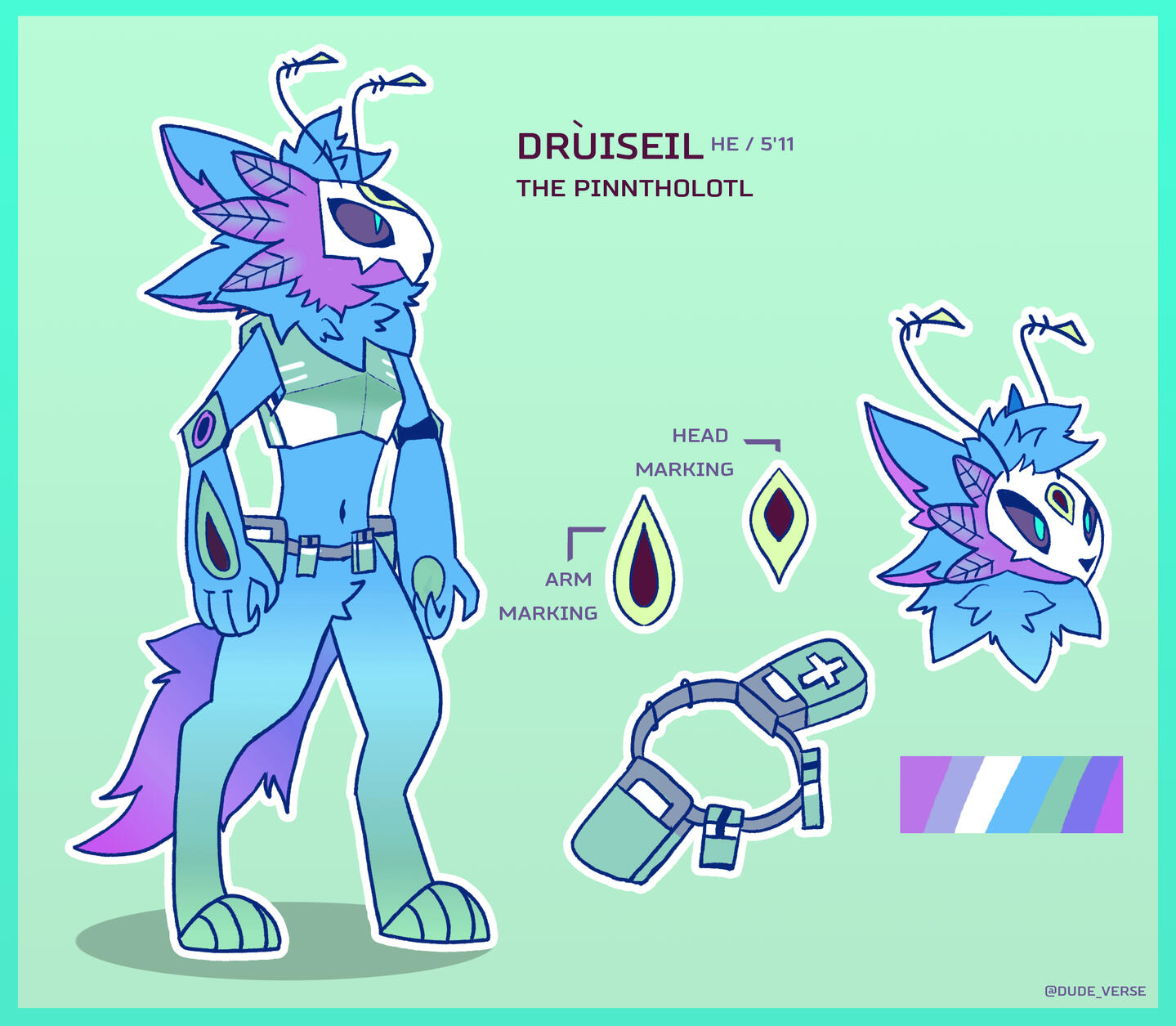 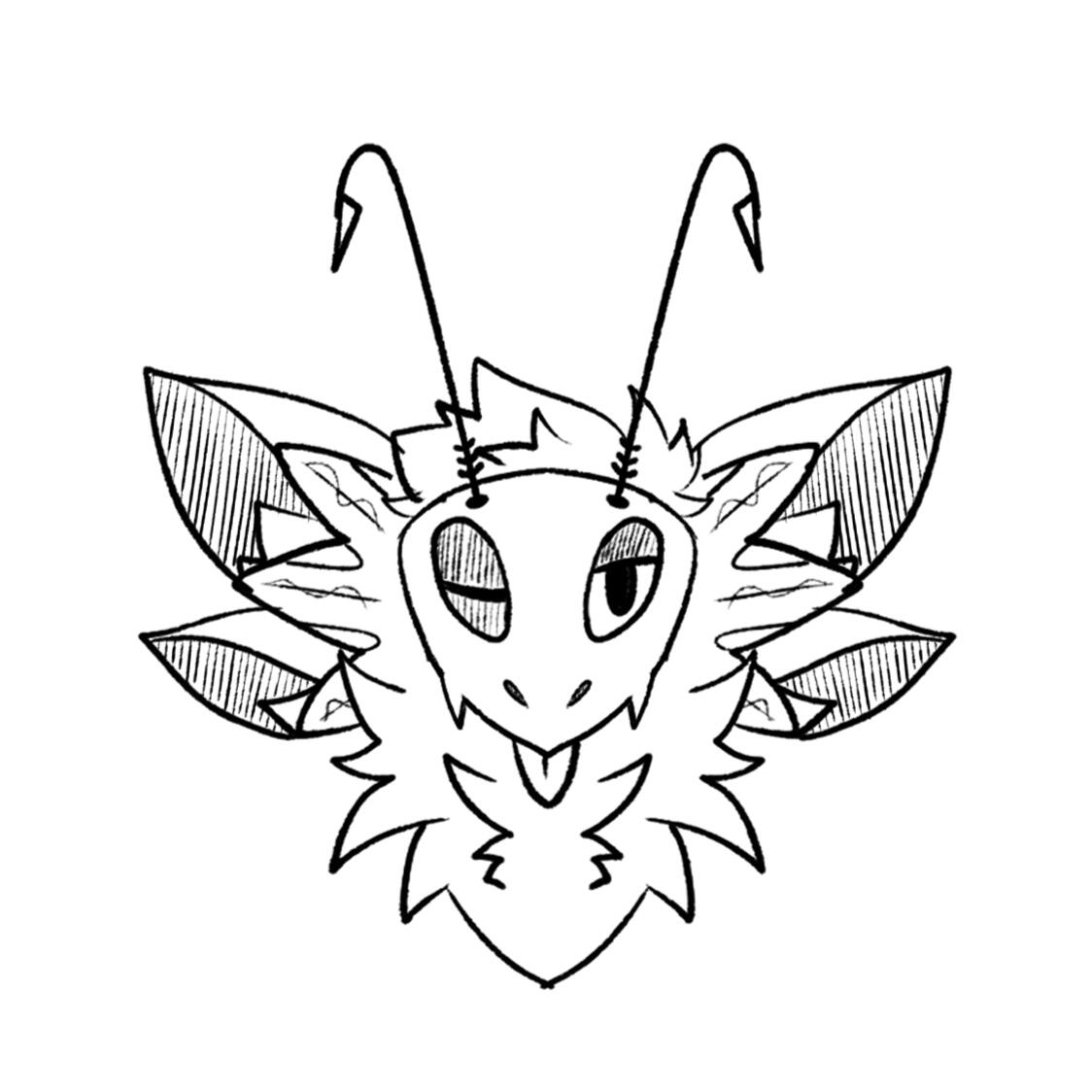 A T T E N T I O N !For your Pinntholotl to be cannon it is required that your sona should have the required traits such as the exterior skull being a fixed design, though skull markings can be freely designed, insect antenna, two pairs of ears, and three pairs of gills. You may combine your design for the body. You can also freely design your armor. You cannot use mythical or none existent creatures. Only the ones that exist on Earth.

Original lore and species written and designed by Verse